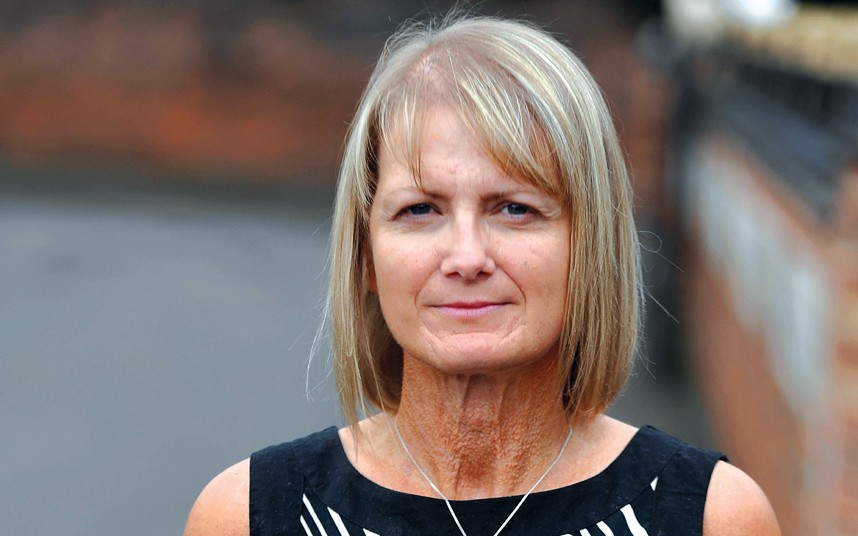 A soldier’s wife has condemned the postcode lottery of care on the NHS after she was denied treatment she needs to save her eyesight.

Dawn Thomas who is losing the sight in her left eye and having problems with her right.

Dawn Thomas fears her family may have to sell its home , to pay for private help if South Staffordshire Primary Care Trust (PCT) continues to deny her medication available elsewhere on the NHS.

The PCT told the lance corporal’s wife that it would not fund injections which can cost up to £800 each.

The trust has since decided to review its decision following the receipt of further information about the patient’s case from the Macular Disease Society but is yet to give its ruling.

“If the PCT doesn’t fund the treatment it will condemn me to blindness,” said the 44-year-old, a mother-of-one.

“I would have to give up my job and driving – it would be life-changing and devastating.”

Mrs Thomas, from Branston, Staffs, who has almost lost vision in her left eye and is having trouble with her other eye, added: “If the PCT doesn’t fund the treatment it will condemn me to blindness.

“I would have to give up my job and driving – it would be life-changing and devastating.

“We are now thinking of selling our house to fund the treatment privately.”

Although Mrs Thomas was diagnosed with pseudoxanthoma elasticum (PXE) when she was 21, it has only given her serious cause for concern in the past 12 months.

After suffering headaches and worsening vision in her left eye at the turn of the year, she saw a consultant at Burton’s Queen’s Hospital who allegedly attributed her problems to her glasses and told her to return in a year.

Concerned, Mrs Thomas saw her GP and two months later was seen at the Royal Derby Hospital by another consultant, who spotted abnormal blood vessels and the appearance of a bleed in her left eye.

Another expert at the hospital confirmed the findings and the fact that treatment was available – but not on the NHS.

He supported Mrs Thomas’s funding bid to the PCT but it sent her a letter saying her case was not ‘exceptional enough’.

“I’ve worked all my life, always paid my national insurance and thought I would never have a problem getting treatment on the NHS,” she said.

“I thought the NHS was healthcare for everyone but since I’ve gone through all this I feel like they don’t care about people.

“It’s about whether they meet their expenditure targets. They just seem so heartless.

An NHS spokesman said the original decision not to fund Mrs Thomas’s treatment was ‘being reviewed’.

“This is following the receipt of further information from the Macular Disease Society, who are acting on behalf of Mrs Thomas,” he said.

“The decision will be reviewed and examined by our clinically-led panel and a decision should be taken within a month.”

The deterioration, known as wet macular degeneration, can be treated by three drugs: Macugen, Avastin and Lucentis.

Depending on which is used, treatment can cost up to £700 or £800 per injection, plus the consultant’s fees if the treatment is private.

PXE is a hereditary disorder in which the elastic fibres that normally occur in the skin, eyes and cardiovascular system gradually become calcified and cause characteristic symptoms in each area.

It is estimated about one in 25,000 people in the world have PXE, but recent indications are that it is more common.

Approximately 60 per cent of PXE sufferers develop eye problems and many experience the loss of some central vision.

HEALTH chiefs’ initial refusal to fund treatment for Dawn Thomas was ‘a cruel decision’ that could potentially have a ‘massive impact on her quality of life’, campaigners have claimed.

The RNIB blasted South Staffordshire Primary Care Trust (PCT) after it sent the 44-year-old a letter declining to pay for her to have injections – despite the availability of treatment in other parts of the country.

“The refusal of her PCT to fund an effective and proven treatment is a cruel decision that is likely to mean Mrs Thomas has to stop working,” said Steve Winyard, the charity’s head of campaigns and policy, speaking after the initial letter.

“There will be a massive impact on her quality of life and a big long-term cost to the taxpayer. “If there’s an approved treatment available which will save a person’s sight then it should be given.

* * * * * * * * * * * * * * * * * * * * * * * * * * * * *
The article above just re-iterates the problems we are faced with. The work of the PXE Support Group is even more important now than it has ever been. Every week we support people with PXE who have started to lose their central vision. We are fighting battles constantly to educate staff in Hospital Eye Units about PXE. Awards for All (The Lottery Fund) gave us a grant for £10,000 which came to an end on the 27th July 2012, to fund a project called Ten Days to Save Sight. Part of this project was to hold a symposium however as this was not viable as the Specialists and Doctors etc are being inundated with patients, I was invited to give the first presentation of many on PXE at the King Edward VII Hospital, Prince Charles Eye Unit in Windsor. The presentation was given as part of the eye units staff training sessions held during lunch. As I have PXE and have the eye problems I am able to tell the specialists what it is like to have to deal with the fear of not knowing what is going to happen, not being able to plan for your future etc. Giving the presentations gave the medical profession a chance to learn about PXE and see for themselves first hand what the skin manifestations look like and to examine my eyes. The feedback was brilliant and I have been invited back in 6 months time. Now we urgently need more funding to carry on this work in other counties as we want to roll this training out on a National basis.
* * * * * * * * * * * * * * * * * * * * * * * * * * * * *