PXE and the Skin

The first manifestation of PXE, and the one which almost always makes the diagnosis possible, is the appearance of highly characteristic, slightly thickened, cobblestone-like patches of skin. They most commonly first appear on the sides of the neck and later in other flexural areas (underarms, folds of arms, groins, behind the knees)

Occasionally, if you know what to look for, children can show signs of having PXE when they are around 7 years of age. The skin on a child’s neck can appear to look dirty as though the child has not had their neck washed (unfortunately in some cases parents have become so fed up thinking their children are not washing their necks that a parent has taken a scrubbing brush to the skin or have tried over and over washing their necks with a flannel, all this acheives is to aggravate the skin turning it red). Skin changes first appear at an average age of 13 years with a range from age 2 years to about 20 years by the onset of what appear to be very small patches of skin on the sides of the neck which seem to have a cobblestoned look, chicken skin, old leather or even stretch marks.  In rare instances, the onset of skin lesions may be delayed until later in life but many such individuals probably have had small skin lesions for many years that were unrecognised as PXE.

In a few individuals, the skin involvement is so mild it may be thought to be lacking. However, very careful examination or a skin biopsy will almost always reveal PXE.

Skin lesions cause no medical problems in themselves but can be cosmetically objectionable if they become severe   Plastic surgery can help in some cases. 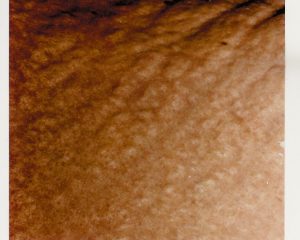 This photograph shows extensive, characteristic skin lesions on the side of the neck.