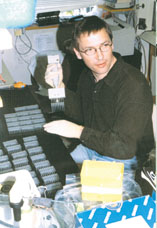 During November 2000, PiXiE founder, Elspeth Lax, visited Berthold Struk at the Harvard Medical School, Boston, US. One of the world’s leading researchers into PXE, Dr Struk tells us about his work and Elspeth’s visit.

It was one of my personal highlight events of the last year when, in November, I eventually had the long awaited chance to personally meet Elspeth Lax, Founder and Chairperson of the world’s first patient support group for Pseudoxanthoma Elasticum.

PiXiE was founded in 1984 in a suburb of London, four years before the National Association for Pseudoxanthoma Elasticum (NAPE) was established in the United States.

I was very curious what character I would meet… and my expectations were high. As a physician, I know too well – and I have seen many, many times – what it can mean to someone to be confronted out of the blue with the diagnosis of a rare disorder like PXE. Often, even the physicians who make the diagnosis do not exactly know about most of the health implications of such a diagnosis for their patients.

This was also Elspeth’s experience at the time when she was first diagnosed. Instead of accepting her initial shock and disorientation about diagnosis and implications of a rare inherited disorder, she took her needs for more, better and readily understandable information to a new, at the time vastly unknown and therefore unusual, but also very healthy level, in order to facilitate her understanding and daily coping with this disease. She broke her isolation and started to look for other patients with PXE to learn from them and to share her experiences. This unusual personal courage evolved into what is now one of the most successful national and independent patient support groups for a rare disorder like PXE.

How unusual and novel Elspeth’s founding of a patient support group was back in 1984 may be illustrated by the following comparison. It happened approximately at the same time when the Polymerase Chain Reaction (PCR‰) was invented. By that time genetics, particularly in Europe, was still operating on its traditional grounds prior to the molecular revolution which was considerably facilitated by the invention of PCR. Patient support groups were as single as the knowledge about the PCR method in 1985. Independent of PCR but of similar importance to the changing role of lay people in medicine, Elspeth was one of the very early entrepreneurs and advocates for a support role of lay people for other patients with the same disease.

As PCR is now a basic and simple laboratory tool (comparable to a screwdriver in a household toolbox), multiple copies of patient support groups for all sorts of diseases have appeared like a fashion or like mushrooms on wet forest ground, not always, but often to the advantage of patients.

There is no doubt that apart from certain exceptions the concept of lay support for patients has proven to be as useful and fruitful for patients and physicians alike as is PCR for molecular biology.

The inventors of PCR received a Nobel Price. Unfortunately there is no such price for extraordinary ideas and achievements of lay people in medicine, otherwise Elspeth and, of course, otherpeople with similar achievements would be very hot candidates.

After so much introduction with regard to my personal perceptions of Elspeth’s achievements in order to explain my high expectations, let me summarize my impressions after meeting her, talking to her and working with her as follows. I met an exceptional character, as I expected to meet, and I could convince myself that her organizational talent, her spirit, her commitment to help and serve patients with PXE and her ability to work hard, clearly and heavily outweighs her personal weight which is of course a very personal matter. (Elspeth, I tried to be honest and funny!)

After attending the board meeting of NAPE in Denver Colorado, Elspeth visited Dr Neldner in Lubbock Texas. She stayed there for a week and then travelled to Boston. She arrived on Wednesday before Thanksgiving and spent Thanksgiving and the following weekend together with us at our home in Brookline.

We spent an unforgettable Thanksgiving together with other guests at our home. It remains unforgettable because we were an international group of people, celebrating the most traditional and important American family holiday of pilgrimage according to the customs my family has gotten acquainted with during our five years of research pilgrimage here in Boston.

The following day, Elspeth decided not to tour Boston but to help out in the lab. This decision caught me by surprise, but just for one second, and I accepted her offer immediately since I had several manuscripts which needed to be transformed from German-American English to ‘Shakespeare-English’ – and that was what Elspeth worked on during her visit at the lab. 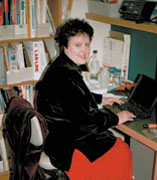 Elspeth Lax, helping out at the Laboratory of Molecular Genetics and Genetic Epidemiology at Brigham and Woman’s Hospital, Harvard Medical School, Boston, Massachusetts

We also used the breaks to talk about genetics and medicine in general and also about specific medical and genetic issues of PXE and how her support group can further integrate into the Harvard PXE Consortium, which comprises 17 academic institutions and several national patient support groups around the globe.

Yes, indeed this is very close and the discovery of the gene can happen any day in any of the laboratories which work on PXE.
We shared our experience and views about the NHS and where to best establish a clinical center for PXE within the UK.

Since PXE is a rare genetic disease, it is important that most patients are seen by physicians with a special interest and expertise in such a disease. This is to the benefit of both sides. The patients receive expert care and provide the experts with the chance to further sophisticate their expertise with any additional patient they see.

I undertook part of my medical studies in London at Charing Cross Hospital and the Royal London Hospital and I still have excellent contacts with those physicians with whom I worked. We discussed a couple of first choices in London, Edinburgh or Oxford.

On Elspeth’s last day before returning to the UK, she took our kids out to one of the local malls. They all had a wonderful afternoon since there were a lot of potential holiday presents to look at.
Since then we are missing her here in Boston.